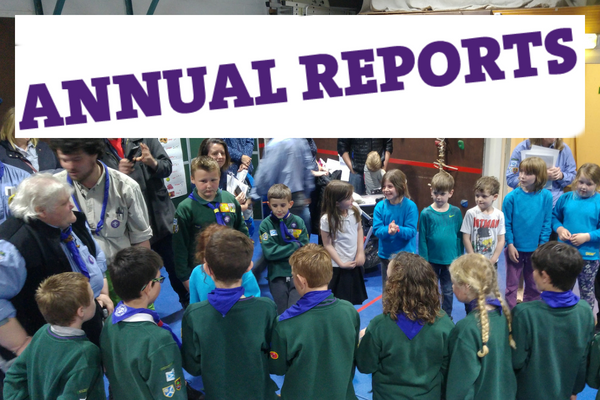 Our annual report was presented to the Group Council on Monday 5th June. Read the report below.

Official report for OSCR including finances

We’re pleased to report that 2017-2018 has been a brilliant year for the Scout Group.
We have a dedicated leadership team who provide great opportunities for our young people to enjoy new adventures; to experience the outdoors; interact with others, gain confidence and have the opportunity to reach their full potential.

The team continue to do training to help them do the job effectively, with David (Smith), Katy, Paul and David (Robertson) doing a couple of weekend canoe and power boat training courses to enable them to run safe water activities. Paul, Katy and Leisha and in the process of assessment for their Nights Away permits, meaning that the Group continue to enjoy safe and fun camps.

Leisha has stepped up to the mark and is nearing her first year as Cub Scout leader—I’m sure all will agree that she is doing the job brilliantly!

Busy Programme
I’m sure that you’ll agree when you read the Section reports that every section has had an adventurous, varied and fun programme over the year.
Finally, on behalf of all the leaders we’d like to express our grateful thanks to all the adult team ‘behind the scenes’ – Andy the Group Chairman, Cliff the Hut Caretaker, Anna the Treasurer, Natalie who looks after hall bookings and other parents and committee members.

Firstly a big thank you to all at Team87—the leaders , volunteers, Group Executive members and also all our hall hire groups.

Without all this help and support the 87th would not exist and therefore all our young people in our community would be without any Scouting.

A special thank-you to our Group Treasurer Anna Hamilton, Cliff Blackie or caretaker, Luana Careccio or Secretary, Marie Jarvis and all our Group Executive members. Please we are always looking for additional parent support including joining the Group Executive, cutting grass and general hall maintenance etc.

Any and all support gratefully received.

As you can see from all the section reports our Group offers our young people a very wide range of training, activities and adventures and long my this continue.

We have 20 enthusiastic Beavers at the moment. A few members transferred to Cubs in January and quite a few more will be ‘pulled up’ tonight. We are looking forward to welcoming new members from the waiting list in August.

As always, the Beavers have had a very varied programme since last August. Beavers get to choose the programme themes at the start of each term. Their ideas included themes such as Pets, Robots, Secret Codes, Musical Instruments, a Teddy Bears Tea Party and Food from Other Countries. In December, we joined many other Beavers from the District at a Magic Show. The Beavers loved it – and the Leaders were a bit bemused as to how he did the tricks.

In January, we started a series of 4 nights learning about Beavers in other countries (Can you match them up: Castorinis, Bevers, Joeys and Tiger Cubs with Netherlands, USA, Italy and Australia). We have also learned about some of the people who invented things that we now take for granted – TV, Light Bulbs, Telephone and the Aeroplane. We even managed some in-flight refreshments. Our Woodland Walk on Corstorphine hill was a great success. We spotted everything on the eye-spy except a zebra and then we finished with a hot dog roll at the campfire near the “summit”. In May we had various themes for “Scouting Skills”. This included Cooking, Maps, Tracking, Tents, Ropes, Knots, First Aid and Hygiene. (They are desperate to try a camp toilet !!).

Our annual picnic to North Berwick was enjoyed by everybody. We took the train and then walked to the play park for a picnic. Later we moved down to the beach where we played in the sand and paddled.

We will have our sports night in our grounds in mid-June and then our last night is a trip in Sparkie (power boat) in Granton Harbour.

We have help every Tuesday from our Young Leaders Tia and Sophie from our Explorer Scouts. We also rely on all of the other Group leaders and adult helpers for occasional support. And finally – a big thank you to all parents for their continued encouragement that they give to the Beavers and Leaders.

Please have a look at our display board and slide show at the AGM.

At the moment we have 18 Cubs, a few will be moving on to Scouts after the summer but we will be welcoming the Beavers who are being pulled up at the AGM on 4th June.

The Cubs have taken part in a busy, varied programme based on ideas they have given. They have been busy working towards badges, had a few nights themed on various celebrations eg St Andrews day, Chinese New Year.

We hired the sumo suits which was a great laugh, the Cubs all enjoyed wearing the suits and having sumo ‘fights’. Leaders had their own work out, helping them all up as they got stuck when they fell over! A few weeks later we were dressed up again, as we joined the Scouts and Explorers for our Halloween Party. Everyone enjoyed zombie games, dooking for apples, syrup doughnuts finished off with songs around the campfire.

The Cubs had asked to make pizza, so for our Christmas treat we went to Frankie and Bennie’s, all the Cubs made their own pizzas and mocktails. Very proud leader as the staff commented that they were one of the best behaved groups they’d had.

Few of you may have seen on the notice board that we were awarded our Youth Approved Foundation Award and hopefully will be receiving Bronze very soon.

Adam has remained as assistant Cub Leader whilst Euan has now gone from young leader to adult helper. We have been lucky to have two enthusiastic young leaders, Kyle who is an Explorer and Erin who joined us via Duke of Edinburgh but has since decided to stay as YL and has joined our Explorer group. Recently Colette has joined us as an assistant leader.

We often receive support from other leaders within the group to allow us to take the cubs out.
As most of you know this has been my first year as Akela. It’s gone in fast but it has been enjoyable getting to know all the Cubs and their parents.

I would like to take this opportunity to thank all the leaders and parents for the ongoing support and help throughout the year.

The Scout Troop currently has 15 members which is roughly where we’ve been sitting for the past 6-9 months. The Troop has seen a change in leadership with Paul having taken up the position of Section Leader. Paul is assisted by Carrie, David, Derek, Grant, Katy and Roy.

Our programme has been jam-packed throughout the year with activities such as canoeing, outdoor trips to Fordell Firs and Cramond Island, a night hike in the Pentlands, a visit to RNLI to learn about water safety, trampolining, rock climbing, and we also hired in sumo suits for a night in the Scout Hut.

We’ve been camping on 3 occasions since the last AGM: a group camp to Canty Bay, Summer Camp at Sandy Island and Easter Camp at Nineacres Memorial Site.

The Group have been successful with 2 grants for new equipment, one of which from ALDI was used for a batch of branded waterproof jackets, and the other was a grant from Tesco for a new marquee. This will be used for a very long time and any support received from parents through blue tokens at Tesco is much appreciated. Also thanks to David for his efforts around this on social media.

On the subject of social media, you may have noticed a lot more activity recently. Again this is mainly down to a lot of hard work by David and this is still ongoing to publicise Scouting more in our community with the hope of getting new members. Please add us on social media @87thscouts for Instagram/Twitter, and @grantonscouts on Snapchat.

Leaders have also been training over the year to help deliver a varied programme and offer greater flexibility. This has included powerboat and canoe training for Paul, David & Katy.
Finally, we have all been focusing as much as possible on youth-led scouting. As part of this, we have just been awarded the Youth Approved – Foundation Award. This is a recognition from The Scout Association for the work we are doing with our young people. You will soon start to see the Foundation Award on our correspondence and we hope to progress this to the Bronze Award in due course!

The last year has been successful where the Explorers have managed to maintain our membership.

Due to Scout Hall availability. most of our meetings are held at Granton Church Hall with the occasional meeting at the Scout Hall. We currently have a strong leadership team consisting of Stuart Young, David Smith, Seamus Somerville and Luana Carecchio.

Over the last year we have taken part in the following activities : Navigation (Mapping Compass), Canoeing, Kayaking, Stove making, Baking, Fire Lighting, Ten-Pin bowling, Cooking, HillWalking, Archery, Bushcraft, Swimming, Power Boating, BBQ on Cramond Island and Bike Maintenance. Burns Night, CV Writing, Burns Night and visit to Boardwalk. Over the last year we have more camps than in any previous year, where we took part in the following camps :

International Summer Camp,  Sandy Island. Last summer we had a joint Summer Camp with Explorer Scouts from just outside Rome in Italy. Despite Granton Explorers being outnumbered by the Italians (26 Italian Explorers and 7 Italian leaders) it turned out to be a fantastic experience for all.

Easter 2018 Weekend Camp – Nineacres Campsite – Crook of Devon. This was a weekend camp, mostly planned by the Explorers themselves.

For Summer Camp 2018 we plan to hold a joint camp on Sandy Island (Killin) with the 87th Scouts.

We'll be adding photos from the year's activities very soon......

Group Exec & Leaders - next on