‘To anyone who hasn’t tried Scouting before, I’d say come on up and have a go! I think that most people don’t really know that Scouting is about activities, friendship and meeting people from other countries. I’ve been in the Movement since I was a Beaver and I still love it!’ Explorers are the fourth section of the Scouting movement. Right from the time of Baden-Powell, there have been arrangements for young people who wanted to continue after their time in the Scout Section, and in 1967, Venture Scouts were formed from the existing Senior Scout and Rover Scout Sections. During the late 1990s we decided that, to meet the changing needs of young people, there should be two sections for the over-14s: Explorer Scouts for 14 to 18-year-olds, and the Scout Network for 18 to 25s.

WHERE DO THE BADGES GO? click on the image to enlarge 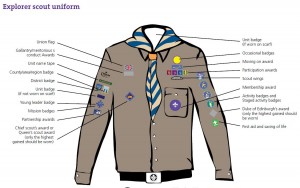